The Lamens were approached early on as they were fairly simple.  They are used to identify the officers in Golden Dawn ceremonies.

I used a small dremel to route the edges smoothly.

They were then primed, dried, and sanded in preparation for spraying. 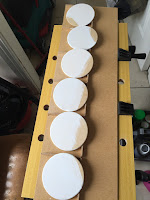 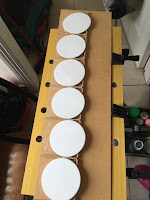 I'd made a small station for painting/spraying so I could move the set around easily (With kids in the house I needed to be able to keep these out of reach) - But also served to stop the disks moving about and give some airflow near the edges and underneath.


I started the designs and masking areas needed, Then the masking was cut carefully.

I had tried to get the Kerux lamen tidy, but failed to cut the curves of the mask cleanly (I'm old and my hands shake lots lol) - Even though it was fun to paint these... I had a backup plan should the lamens not turn out cleanly.  Anyway, on with the process! 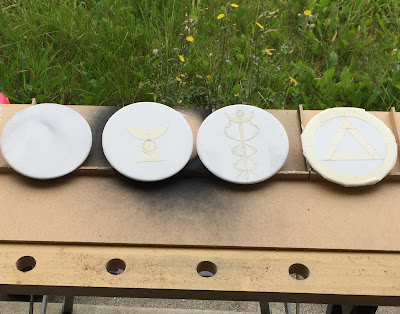 Then spraying over the mask next. 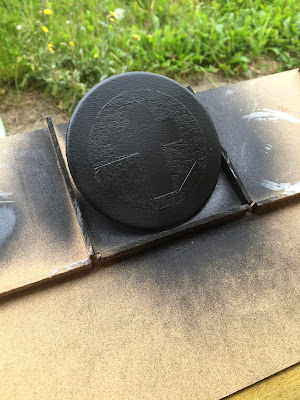 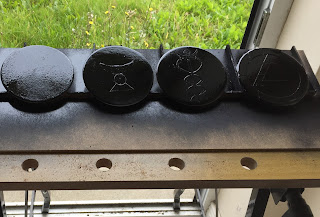 The spraying worked well and didn't bleed under the masking as it dries so quickly.
The finish after peeling the masking off was pretty neat, but as you can see below the Kerux was poor quality.

These could be done on a very cheap budget if you can get the masking cleanly cut before spraying - You just need the disks, primer, and small cans of spray.


If you can afford to, you can get circular printouts made of the lamen designs from various sites (I used stickeryou.com), mount them on the mdf circles and then spray with lacquer after. Check out the Kerux design on these printouts (These are vinyl prints and not paper. 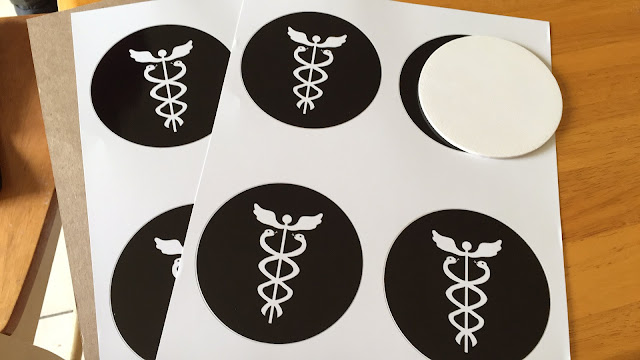 The collars for the Golden Dawn lamens were supplied by Seshet Designs who was able to make them to exact specifications and also supplied the velcro mounts (so the collars could be washed) - Will update with pictures soon.